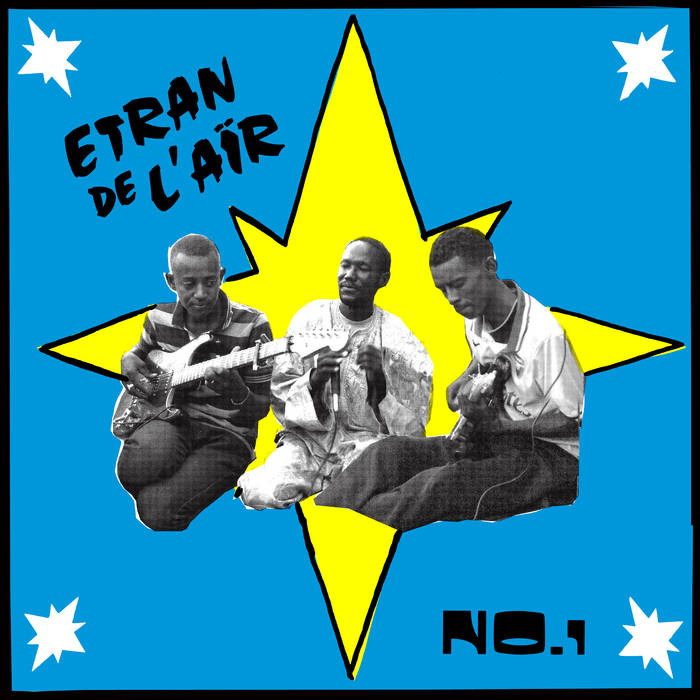 Cordâme Great music! Many thanks.

The name Etran de L'Aïr translates to "the Stars of the Aïr," the mountainous region of Northern Niger. They are based in the town of Agadez, an urban center renowned for the electric guitar and the Western named "desert blues." In the Sahara, this electric guitar genre is intertwined with social function. It's a lucrative commerce, and gigging bands make their living in weddings, baptisms, and political events. Etran de L'Aïr is one of Agadez's longest playing groups on the circuit. Yet they are also a band that has remained on the fringes, stars of the Agadez working class.

The history of Agadez is a series of invasions and conquerers each leaving their mark on the town. Founded in the 14th century as a Tuareg city, it was later conquered by the Songhai Empire. Subsequently, Hausa culture worked its way North, and the city became an important crossroads of trans-Saharan trade. In the 19th century the city became part of the French colonial empire. This patchwork influence continues today, with Chinese made goods flooding the market, immigrants passing by on their trek North, and a massive US military base a stone's throw from town. Suffice to say, modern Agadez is a multi-cultural city.

Etran de L'Aïr play a style that captures the contemporary sound of Agadez, incorporating vastly different musics into their repertoire. While Tuareg guitar follows a predictable format, Etran breaks convention and throws a third guitar into the mix. The two lead guitars solo on top of one another, in constant dialogue, with a crashing response from the drum. There is a bubbly underwater warble that emerges from reverb and crackly amps. It's electric party music, surf rock, from a place that is all beach. They differentiate themselves from the other wedding bands: "We play our own folklore, not like the other artists in Agadez. Our music is based around traditional Takamba...and we listen to a lot of Malian music. Not Tinariwen, but musicians like Ali Farka Touré and Oumou Sangaré."

Etran de L'Aïr is not just a musical group, but a family collective. The group was formed in 1995. Agadez was much smaller then, few homes were electrified, and guitars were rare. "When we first started to play in weddings," Abindi explains "we only had one acoustic guitar, and for the percussion, we hit a calabash with a sandal." As new technology found its way to Agadez, they band adapted, amplifying the acoustic guitar with a transducer microphone, acquiring electric guitars, and finding a drum set. As the family grew, so did the band, integrating the younger siblings into the musical group.

There is an established hierarchy in Tuareg society, and this is reflected in the wedding scene. The best wedding contracts are awarded to musicians with social standing, tribal affiliations, and family connections. Suffice to say, Etran does not belong to the upper class. "They make music for people who don't have money," says manager Madassane. "If a wedding can't afford the expensive musicians, they hire Etran." So while the band continues to gig constantly, outperforming all other bands in Agadez, they still find themselves in dire straits, confined to a DIY aesthetic of out obligation. Their drum kit is dented and the cymbals are cracked, with bites taken out of them. The amplifiers could just have well have been excavated from desert sands. Nevertheless, the band not only makes the equipment work, they make it sound amazing.

This is Etran's debut record. They claim to have written over 40 songs, but none of them have been released until now. This session was recorded live, outside of their family compound in the outskirts of Agadez. The impromptu performance drew the entire neighborhood out of their houses - eliciting the audible clapping, shouting, and ululation. It is here as it was played, outside, with all the enthusiasm and passion of an evening at the end of the raining season one day in Agadez.

Semiratruth joins the show to discuss their latest release, "loading..".